Having been the setting for adored films such as Cleopatra and The Talented Mr. Ripley, Ischia, on Italy’s breath-taking Amalfi Coast, was a natural choice to host “an international cinema competition dedicated to all the works that have promoted the value of the local territory” (#quote courtesy of Wikipedia).

Since launching with this mission in 2002, the Ischia Film Festival (IFF) has established itself in the cinema world, and just celebrated its 13th edition (June 27th to July 4th).

Each year, under the direction of founder Michelangelo Massina, the IFF attracts an ever-growing number of attendees who are by awed by its charming and surreal vibe.

Can you think of a better place to watch movies than the intimate rooms or nooks and crannies within a castle?  The IFF takes place at the stunning Castello Aragonese.  The films are shown at no cost, on a first come, first served basis.

(In 2015, the Best Film award has gone to 1000 Rupee Note, by Shrilhari Sathe, while Francesco Munzi, writer and director of the powerful Mafia drama, Black Souls, won Director of the Year.  Click here for a full list of i vincitori – Winners!  Of the 13th edition!)

IFF promotes a unique and very interesting film festival concept, which focuses on a film’s location (indeed, “the value of the local territory”).  Films which ‘get this’, by supporting and celebrating cultural identity, revealing and promising tradition, geographich beauty, history, etc., have a strong chance of being selected for IFF.  The idea is that this concept will encourage audiences to visit the cultures represented on-screen, and enjoy experiencing them in real-life also.

The IFF is definitely a place to meet and mingle with a film-savvy audience.  The instructive cinema-related lectures and events, beginning with the opening gala dinner, encourage communication and propitiate a truly magical atmosphere.

Ischia’s astounding beauty and the festival’s concept of location appreciation, combined with the presence of renowned international and Italian film artists, will definitely have us returning to IFF in 2016.  If you don’t want to miss all the tidbits, stay tuned! 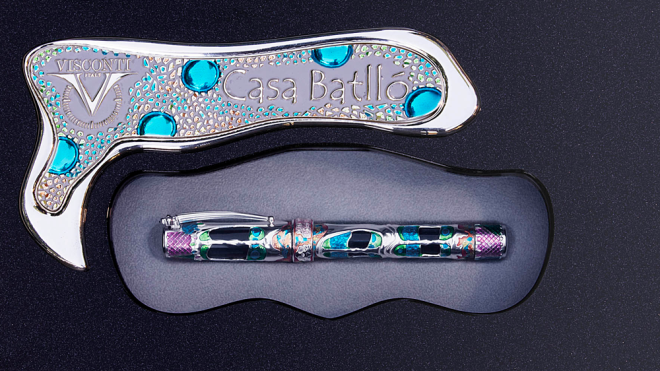 Visconti’s Casa Batlló Pen Was Inspired by the Inimitable Gaudí